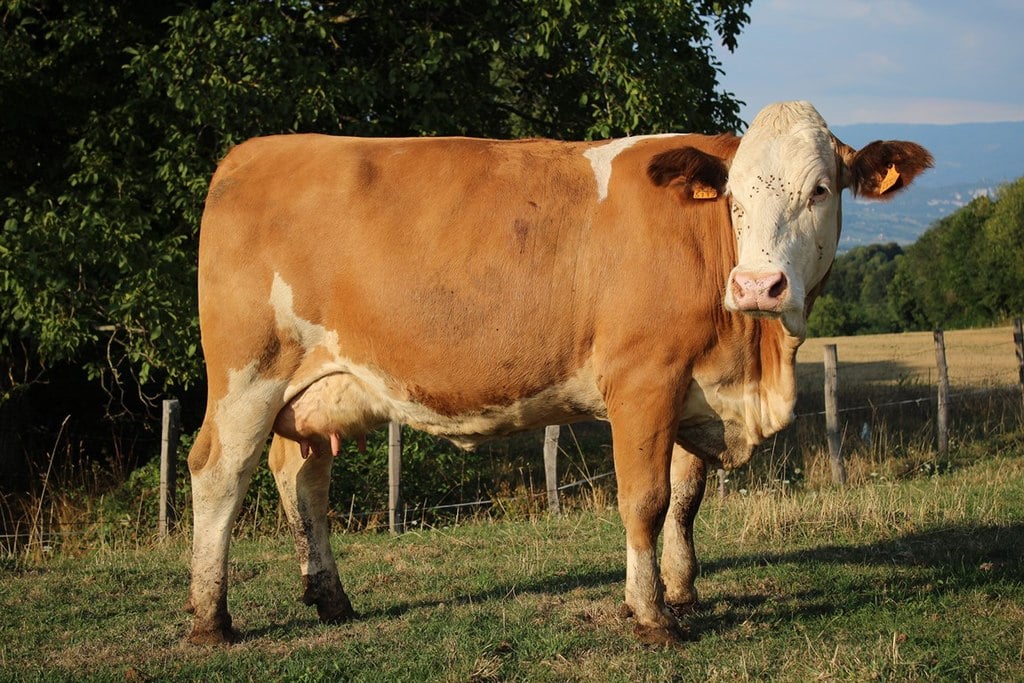 The Simmental is among the oldest and most widely distributed of all breeds of cattle in the world. This fascinating breed rose to prominence due to three main factors: their milk, meat, and strength as a draft animal.

From their humble origins in the picturesque Simme Valley in Switzerland, there are now believed to be as many as 60 million Simmental cattle worldwide, with more than half of this figure residing in Europe alone.

The Simmental is a fascinating breed, which is why we’ve compiled everything you should know about Simmental cattle into this helpful guide. The Simmental can be traced as far back as the Middle Ages and is believed to have first been bred in the Simme Valley, which is located in Switzerland’s Bernese Oberland. Early records suggest the Simmental was a result of cross breeding a large German cattle breed with a smaller breed native to Switzerland.

It is believed some Simmentals were exported to Italy as early as the 1400’s, however it wasn’t until the 19th Century that the breed began to spread across most of Eastern Europe, the Balkans and Russia.

By 1895, the popularity of the Simmental had spread to South Africa, before making its way to Guatemala in the Western Hemisphere in 1897. Brazil and Argentina followed, before the breed was shipped to the Republic of China in 1976.

Additionally, Simmental made their way to America during the late 19th Century. They were reported as early as 1887 in Illinois, 1895 in New Jersey, and between 1916-1920 in New York and New Mexico.

Though they are prevalent throughout the world, the breed isn’t referred to as a Simmental globally. In Germany and Austria, it is known as Fleckvieh, while in France it is called Pie Rouge. Simmentals are known for being a large-framed and well-muscled cattle breed. They vary widely in their coloration, which typically includes shades of straw, yellowish-brown, and dark red with white markings across their head, lower chest, belly, or legs. In America, however, Simmentals are predominantly red or black in color.

Many also have pink pigment around their eyes, which provides them with protection from common eye conditions such as pinkeye and sunburn.

The breed can also be horned or polled; however, a common distinguishing feature is their heavy dewlap, which refers to the loose skin hanging beneath their lower jaw and neck.

They have a short, soft coat and tend to have larger, longer heads than most other breeds of cattle. Additionally, they have considerably larger ears that are set lower on their head. This noticeable trait that can help identify Simmental and Simmental-cross cattle.

The weight of a typical Simmental can vary, especially by their use. However, cows weigh around 700-900 kilograms on average, while bulls are much larger and weigh-in at around 1300 kilograms. Although the Simmental is widely praised for its longevity, the breed isn’t without some increased risk of health problems. Female Simmentals make up one of multiple beef breeds that are more predisposed to prolapse of the cervix and vagina, particularly during or after pregnancy.

An inherited predisposition to cardiomyopathy, particularly young adult congestive heart failure, has been reported in Holstein-Friesian cattle in Japan, Canada, the UK, and Australia, and in Simmental-Red Holstein crossbred cattle and Black Spotted Friesian cattle in Switzerland. The peak prevalence occurs in cattle between the ages of 3 and 4. Switzerland was able to drastically reduce this health risk with the introduction of an eradication program, which culled carriers in the sire population.

On the positive side, Simmentals have a lower incidence of mastitis when compared to other breeds. Generally, they are a long-lasting breed, and their popularity remains due to their hardiness and strength.

Historically, Simmentals have been used as draught animals, as well as for dairy and beef. There are a number of factors that contribute to these purposes, including their large, muscular, and strong frames. They have significantly high milk production and give a higher yield of saleable meat. This is because their carcases are considerably heavier and leaner than other European breeds, with minimal waste.

Simmental cattle are also commonly used for cross breeding, particularly with Herefords. Breeders favor the even lines of red and white cattle, which can be adapted to suit a wide range of markets. Additionally, when cross bred, Simmentals help to improve the quality of the meat thanks to their white fat and excellent marbling. Calves gain up to 70% of their final weight before they are weaned from their mother by drinking their mother’s milk and grazing on the same land that their mother’s graze. After weaning, cattle are fed hay, silage, grain and food processing by-products such as cottonseed meal, citrus pulp, tomato pulp, potato peels, sugar beet pulp, almond hulls, cereal by-products, soy hulls, or canola seed hulls. If you’ve never owned cattle before and are considering purchasing Simmental cattle for breeding or meat production, you might not know where to begin.

Here are 6 top tips for looking after Simmental cattle:

Shelter: Cattle require at least basic shelter from wet weather and wind. Your structure will depend on your location and environment. If you opt for an entirely closed barn, ensure there is plenty of ventilation and minimal humidity. Your local regulations will have their own specifications, but on average, it’s suggested you allow at least 3.5m2 for each animal. Additionally, your cattle shouldn’t stand on hard surface such as concrete, but rather, clean and dry straw or woodchip, which will also double as bedding.

Fencing: Like all cattle, Simmentals require secure and taut fencing that’s approximately 1.2 meters tall. Some utilize single-strand electric mobile fencing, which is adequate if the cattle are trained and aware of the wire.

Basic needs: When you provide Simmentals with clean housing, high quality pasture, nutritious food, and adequate sunshine, you can significantly reduce potential health problems. Ensure they have somewhere to use as a scratcher also.

Hoof maintenance: You should also examine your cattle’s hooves every 6 months to determine if they require trimming. Additionally, be on the lookout for cracks or chips. Routine hoof trimming, which should occur annually or bi-annually, should be done by a professional to avoid injury – both to the cattle and yourself.

Vaccines: Like all animals, Simmentals will also require vaccination from common and contagious cattle diseases. Consult your veterinarian for advice.

Health: Try to maintain daily contact with your herd so you can monitor them for behavioural or physical changes. Things to lookout for include lethargy, pale coloring, limping, loss of appetite, teeth grinding, coughing, and abnormal temperature. For reference, the normal body temperature for cattle is around 100.4°F (38°C). Call your veterinarian if you notice any of these symptoms.

Simmentals are praised for being easy to handle, particularly because of their docile temperament and relaxed demeanour. If a Simmental cow or bull has had a lot of interaction with humans from an early age, they may even behave more like a pet and crave affection through petting.

Simmentals may show some signs of aggression, however, when protecting their offspring from a stranger. Otherwise, they typically don’t mind it when their owner handles their young.

As with any cattle breed, there are pros and cons to owning Simmentals.

How to Buy Simmental Cattle

There are a number of different avenues you can pursue to purchase Simmental cattle.

Sales are often held throughout the year and feature a single breed, cross breeds, or a variety of cattle breeds. You can also locate reputable Simmental cattle breeders and buy Simmentals straight from their farm. Finally, local auction barns are another source to purchase Simmentals. Just be warned that cattle sold this way are more likely to have health issues.

When considering a bull for breeding, it is recommended that you buy the best bull you can afford, as they have the ability to improve the genetics in your herd. After all, a bull’s offspring can remain in your herd for years to come, thus producing a knock-on effect for healthier cattle.

When purchasing a female Simmental, you’ll also want to ensure she’s in optimal health and has the ability to birth and wean one calf per year without assistance. Additionally, a healthy Simmental cow, when looked after properly, should be able to maintain their body condition without becoming underweight or overweight.

When assessing a Simmental, pay particular attention to characteristics such as:

Moreover, you’ll want to ask breeders or owners about measurable performance indicators, including:

The American Simmental Association is a great resource for anyone looking to purchase, breed, or own Simmental cattle.

Number of Simmental Cattle in the US

The American Simmental Association registers approximately 80,000 cattle into the Simmental and Simbrah herdbooks each year. From a global perspective, there is estimated to be between 40 and 60 million Simmental cattle worldwide, with more than half of these located in Europe.

This is a widget ready area. Add some and they will appear here.

Manage Cookie Consent
To provide the best experiences, we use technologies like cookies to store and/or access device information. Consenting to these technologies will allow us to process data such as browsing behavior or unique IDs on this site. Not consenting or withdrawing consent, may adversely affect certain features and functions.
Manage options Manage services Manage vendors Read more about these purposes
View preferences
{title} {title} {title}

Find awesome listings near you!